A diary page from visiting a preschool in Reggio Emilia, Italy

Typing up notes from a 2019 visit, it occurred to me that it could be interesting to share. It may help you picture the life of a preschool in Reggio. There is also a lovely minute's video by Reggio on our page 'Introductory Articles on Reggio Emilia's Preschools' . ... 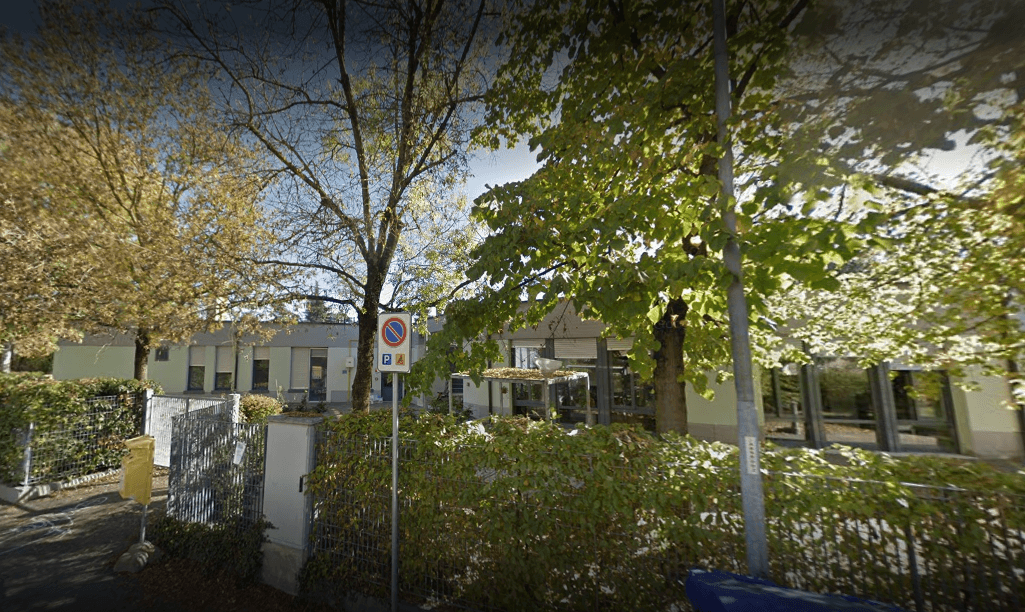 This is the preschool with the circular layout, by the canal; rich in its habitation and embedded in the close locality: quiet streets, dads and children walking or biking in. The spring 'snow' – blossom/seeds – is drifting around.

…a boy, 5, scoots through the internal piazza on his scooter (!) Other children meet, and two hold the door for a while meeting each other, possibly waiting for friends. Children bounce and skip around, meeting each other; there's a hum of easy voices and conversations of children and adults.

Projects documented in the entrance area show how they are joyfully developing their environment and relationships in it – the fence sculpture with 'secret ways' through to the canal path; relationships with the city e.g. project for everyone to travel by bike not car.

Maura: "the children call the dining area 'the restaurant' (it is a narrow 'wing' off from the central piazza.) Built in 1977, then renovated in 2005, when spaces such as dining area were added. Teachers, pedagogistas, atelieristas, families were all involved in the design and the re-design – it wasn't simply devolved to architects.This was one of the first schools to be designed from the first as a preschool

There are four classrooms: 3yrs, 4 yrs, 5 yrs, and a mixed age. Each have 26 children. There's a third teacher in 3 of the classes to facilitate general extra attention relating to the presence of children with special rights.

"8th March" – our name – was chosen in 1979 (two years after the school's opening) to recognise International Women's Day. It also recognises and hours women's role in WWII and those who afterwards worked for the evolution of schools for young children in the city This year we celebrated our name, not only on 8th March, but through March, with different events/initiatives with a focus on women – it was a projetazzione – theatre; pedestrianizing the road outside; a street fair …

'Atelier'' is more important as a value rather than as a place. The atelier is a focus place for the general 'atelier value.' "

For the past ten years we've been working on the outside as a valued environment for being and learning.

'Bikes for all citizens': started as a free bike rent service, then we extended the offer to citizens to leave their cars here and borrow a bike to go into the city.

The five year olds are considering where to plant some fruit trees which have been donated.

The four-year olds are considering the aromas of herbs – it relates to the vegetable garden: the movement of smells: '?How do smells get from the plants to our noses?'

The three year-olds, who started this years – their focus really is 'becoming a group' / how to become a group.

In the mini-ateliers today small groups are working with different types of clay;

In the main atelier – there is work with clay, a 'climbing plant' sculpture: 'climbing plants; climbing humans. (Recently, the children were encouraged in tree-climbing in local woods, with some environmental educators.)

It is morning assembly time: one educator is reading a story about the moon. Children have their chairs in a circle; some move and stand. Another adult accompanies a couple of them, in a casual friendly way. Then there is a big move to where the work with clay is prepared; children go very quickly: two boys settle to small table all ready with water, watercolour tablets and small brushes – they're intent, continuing from previous experiences/work. Five children (three girls, two boys) are at clay table – terracotta and yellow clay, with jasmine or clematis sticks as visual references in the centre. Four boys settle to construction. Within four minutes the room is re-inhabited and settled with these busy and occupied groups.

At the clay table, Silvia (educator) attends, listening (she has a forthright voice when she uses it), with camera also. One girl says "Look Silvia!", but they're not dependent on her – in fact she goes out of the room at one point. They're all standing at the table, though there are chairs. The children are using slip brushes to help glue small elements – typically, they're making intertwined lengths.

The boys bring a box of animals to their 'streets of bricks' ...

Carmen talked of the developments of the garden with collaboration s with designers/gardeners who have a permaculture background.

"Evaluation is not classification – it's to find out the important features of the experience, in order to continue learning"

A question about when children 'lose interest' /'decide to go away': "It's our responsibility to try and find out why – why it's not so interesting (sometimes there's a simple reason), but flexibility doesn't mean 'doing anything you like'."

This evening there's a meeting of the parents of the three-year-olds focussed on 'emotions' – we meet to develop a shared culture of/about emotions – it's not just about individual emotions.

Perhaps these notes only make sense to me, the note-taker ....? I would be interested in hearing about that. Robin
Tweet
Tags:
Reggio Emilia
London Early Childhood Centre seeks Artist-Educat...
Family in London seeks Reggio Approach-conversant ...

Are you a 'Reggio-Inspired' school (or parent) in West London? We are looking for you!

The Many Faces of the Assembly