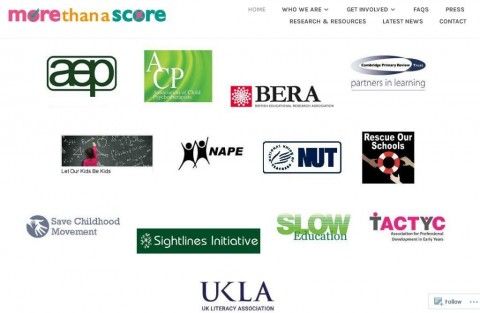 Shortly before Christmas 2015, the Parliamentary Education Committee announced that they would address the question: 'What are the purposes and desirable qualities of education?'. Fantastic. We contributed, (see Diary article) and attended their conference. It has all now gone very quiet.

But not outside of Westminster.

We were delighted to find that a coalition is emerging, and we are now members. It is called 'More Than a Score'  and its campaign is to re-enliven education. It too is addressing the question 'what are the purposes and desirable qualities of education': and it is a group of determined organisations and people.

At MTAS 2016 conference, author Tanya Landman posed the question "Are we in sinister territory? Do politicians actively want to switch children off from learning, from thinking for themselves?"

And, like many of us, she has close experience:

"As [my two sons have] gone through school I've watched their teachers - talented, creative people - being tied in straitjackets by the demands of the National Curriculum and by Ofsted. I've seen students imprisoned in boxes that need to be ticked. I've seen children for whom reading has become a chore rather than a pleasure because these days it's all about targets. Measuring. Levels of attainment. As for creative writing – the idea of that being about self-expression has gone right out of the window – it's just become an exercise in grammar and punctuation.
At a time when China is looking for ways to teach their children to create, to innovate, to invent we seem to be heading in the opposite direction. We're so intent on producing employable units to service the economy that our system is in danger of squeezing every scrap of imagination out of our children.
Imagination can't be measured or assessed but Einstein said 'imagination is more important than knowledge.' " (from Tanya's 2015 Carnegie acceptance speech)

We don't yet know whether the territory is actively sinister: Many people, grown a good deal older whilst rapping on the Westminster door, have concluded that politicians are simply terrified (or overwhelmed.) We shall see. In the meantime, here is a window into that MTAS conference: we hope you will find encouragement to help you spring into the new year: