Here is her reflection, in which she considers the themes:

There is an important and recurring thread which seems to run through all: the call for democracy and children's agency in schools. It is so encouraging that the hosting MP also makes this call - read on:

Should schooling be for 'pouring information in'?

Prof. Sugata Mitra laid out a critique of current schooling and its systems approaches to testing among other things. He said the "just in case" approach where schools fill children with knowledge on quadratic equations and the American civil war "just in case they need them in the future" is not an effective way to learn. Mitra made the point more than once that the Bottom of society is from where the innovation needs to come from not the top.

Children are competent and resourceful learners

Sugata Mitra has received numerous prizes for his work that used installing computers, three feet off the ground in public spaces in India to explore learning and access: the 'hole-in-the-wall' 'experiment.

The conditions for this to work: the space needed to be safe, public, and visible and the groups need to be heterogenous and unsupervised. Mixed age groups of children used the computers Mitra has plenty of evidence that they used them to teach themselves how to use the internet and learn English.

He then went on to explain how he has taken aspects of this research and applied it to schools in places 'where teachers don't want to go'. Working with 8 and 9 year olds in schools across India and the UK. He calls this set up SOLES Self Organised Learning Environments. In Gateshead, for example, Mitra had a classroom set up so computer screens were visible to the teacher and the children free to work in groups, move around and talk. He asked questions for example "what does salt water have to do with sadness?" or "can one thing be in two places at the same time?" The children got to work and found out about such things as biochemistry, quantum entanglement and evolution. He says "it starts with chaos then you wouldn't believe what comes from the children's mouths. The children are able to verify sources and detect fake news, their reading comprehension improves.

"In a world where what they need to know isn't even evident to us- do they know how to get the skills to find out?" He says the teacher needs to come in with the question and then travel alongside them: "You go there, I'll go with you." Mitra calls for students to use the internet during exams and one country, Denmark, decided to try it, but after a while they stopped allowing them to do it because they said students were so-called "cheating" calling their mums and their friends to find the answers instead of searching online.

This is a hot topic of our times: It is the title of an Enquiry by UNESCO in 2015 .Rethinking Education looks at how we can go beyond a focus on reading writing and mathematics and think about how we can educate for living on a planet under pressure - it has with clear proposals and characteristics which many groups in the UK (e.g. Education Forward, RSA, Sightlines Initiative, Forum … )are also dwelling on.

Indeed the renewal of education and its premises has been a call by many, over the centuries. In her article ''Educational Amnesia' published in Forum 47 (2005) and in Refocus Journal 6,  headteacher, author and lecturer Mary Jane Drummond chronicles recurrent experiences and calls since the 1920s in the UK: do follow our link and read the article - it is very much to the point in our times. During the meeting Micheal Newman quoted Earl Lytton and said he was calling for the same thing 100 years ago: "Active learners." Summerhill School was quoted as an example of a democratic pedagogy in the 1920s (and it is still referred to internationally.)

Where to with children's agency?

The work of Sugata Mitra is highly thought provoking stuff and very well backed up and circulated. I'm glad Sophie Christophy (during the seminar) drew attention to the amount of innovation in education taking place and, later, I reflected on the large scale, high level of funding, connections with universities and governments worldwide the work of Sugata Mitra now has. He has chosen certain aspects of the hole in the wall research to develop. The heterogeneous groups had to be jettisoned to fit in to the classroom, the unsupervised aspect has been scrapped and the need for a teacher to ask "big questions' has been introduced.

In my experience it is children who are experts at asking big questions and the assumption that, to explore and develop knowledge an adult's questions are needed, doesn't ring true for me from my experience of schools of Reggio Emilia in Italy and my own work at Wooden House forest and garden school in Dorking, Surrey. When challenged on the discarding of the more open and free aspects of his hole in the wall work, Mitra stated that working like this was not sustainable, the SOLES - self organised learning environments are spreading worldwide and enabling children to learn in places where quality teaching is not available. I wonder if in fact, rather than not being sustainable they are actually 'unscaleable'? Anna Lowenhaupt Tsing writes "Progress itself has often been defined by its ability to make projects expand without changing their framing assumptions." Perhaps children can learn with less 'teaching', perhaps mixed groups work well for this and perhaps it is hard to achieve returns on investments when we do this and we will do it anyway.

I want to use this as an opportunity to highlight the most radical of the ideas in Mitra's work - children don't need to learn in conventional schools with teachers. 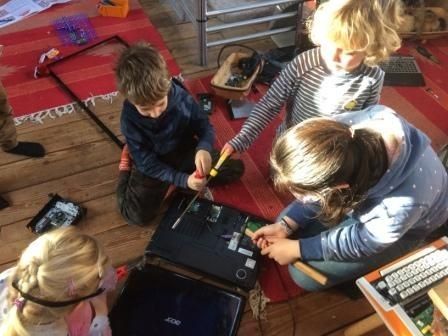 ​​Children learn in heterogenous groups when they are safe, resources are provided to them and they are free to make choices to follow their innate intelligence, curiosity and sociability. I want to encourage people working with learning in ways that honour children's abilities to learn skills, develop knowledge and make the world as they live it.

Emma Hardy MP raised concerns for children's mental health and that of teachers. She said she wants an education where children know who they are and what they stand for and feel comfortable to collaborate, a system where people feel empowered at all times." She called for democracy in schools;  Globalnet representatives suggested a Citizens Assembly on education:  these are calls being made by many - educators, parents, and, thankfully, some politicians. It is time to weave the threads together and fly this flag high.

Lottie Child is founder and pedagogue of Wooden House Preschool.

Through The Window: 'Learning Together at Home' feature

Education is in the beauty of life

No squashing! Leap out of the box

This is soooo important for our young learners!
Mary-Jane Drummond was my tutor at Cambridge - she has so much sense - why can the politicians not see this?
I dread a new Base-line for our 4yr olds - it didn't work before why try it thrice?

Cancel Reply
This is soooo important for our young learners! Mary-Jane Drummond was my tutor at Cambridge - she has so much sense - why can the politicians not see this? I dread a new Base-line for our 4yr olds - it didn't work before why try it thrice?
Cancel Update Comment