0 Item(s)  - £0.00
Your shopping basket is empty!
You are here: EShop
My Heart I Give to Children
Seeking Truth: Sixty Years in Early Childhood Education - Wendy Scott

Each One Must Shine 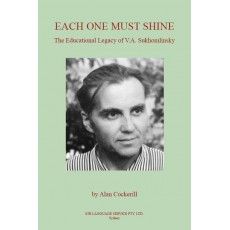 The Educational Legacy of V.A. Sukhomlinsky

Sukhomlinsky was “the most influential Soviet educationist during the 1960s and 1970s”. Joseph Zajda
It may truly be said of Sukhomlinsky that he became a legend in his own lifetime. The school of which he was principal was an educational mecca visited by thousands of Soviet teachers. He was a prolific writer and his publications ran into millions of copies. His personal correspondence was prodigious. After his premature death at the age of 51 he became even more well known and was regarded by many with something akin to reverence. In a survey of teachers conducted in the Ukraine in 1988, Sukhomlinsky’s name was the one most often given in reply to the question “Outstanding personalities of our times who have influenced or are influencing the formation
of your educational ideals and practice.”
Sukhomlinsky’s work is close in spirit to that of progressive Western educators. While still believing in the educational power of the collective, he made the individual, rather than the collective, the focus of education. For him education was a deeply personal endeavour, and the most important educational relationship was the archetypal one between the teacher and the individual pupil.
Sukhomlinsky belongs to a European humanistic tradition in education inspired by such educators as Vittorino da Feltre, Comenius and Pestalozzi, and his work is relevant to teachers and parents in English-speaking countries.